Two years on from Thr!!!er, Sacramento’s premiere dance-punks are back with a sixth LP that references disco and 90s house. We caught up with frontman Nic Offer to find out more about As If, and to chat creativity, critics and clowning about. 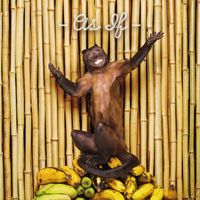 Firstly, congratulations on having the best artwork of 2015.

Can you tell us about the significance of the monkey, please?

It was a lot of things, really. We had the title and I saw a picture of Crystal the monkey, and that to me encapsulated the full feeling of throwing caution to the wind or something, like, “As if. F**k it.” There’s always this idea that you have to be completely serious when you’re making art, and I think you can make art as the clown. In a way it was us embracing ourselves as our primal selves – as the monkey – but at the same time, we were embracing the image people have of us, like, “Oh these f***king clowns.” It was almost as if the world was saying to us, “As if these guys are anything.” And we were shrugging our shoulders back like, “Yeah, as if.”

There’s always this idea that you have to be completely serious when you’re making art, and I think you can make art as the clown.

When we spoke to you around the release of Thr!!!er, you talked about it being the album with all the hits on it. By extension, where does As If fit?

(Laughs) I think we were just trying to write more hits, really. It’s very much an extension of Thr!!!er, you know? We really got into writing. We wrote 40 songs, recorded 20 of them and then our friends picked the ones that they liked best. I think they’re the hits we want for a different world, almost, because sometimes hits means that you’re trying for something and I don’t think we think that we’re still going to have giant hits at this point. [They’re] hits for the world we want the world to be, you know? ‘All U Writers’ is not something the kids I babysit can jam out to or something.

On your blog, you referred to As If as being a “tough album”. Was it tougher than previous records?

I think, by far, it was the toughest. We had this idea that it was going to be a club record, kinda like we do every time. (Laughs) And we went in with a lot of different club music producers but none of it worked, so it ended up coming down to us at the last minute with our friend Patrick Ford. We were set to mix it in two weeks, so we did two weeks of 18-hour days and tried to make the songs work.

There’s a very strong disco feel to the album. Can you tell us about some of the music that inspired As If, please?

Particularly with ‘Freedom’, we were inspired in a way, but we were very conscious that the sound must move forward. We were very inspired by 90s house that was inspired by disco. You know, there was that moment with Daft Punk and Roulé Records, where they were just sampling a disco loop, throwing a 909 underneath it, and then filtering the disco loop? At this point, 19 years in, we’re a pretty good little disco band, so the idea was that we would sample ourselves and manipulate that, and hopefully get something different.

Disco is something that I still always love, but I think I really like the dance music that manipulates it and treats it like a plaything and is almost abusive to it. I think the proper way to do a musical style is to do it with reverence and irreverence at the same time, otherwise it’s just stale and boring.

Did you working methods change at all for this record?

Well, they changed a bit, you know. Mario and I both learned Ableton at the beginning of this record, because it’s kinda like the old Prince theory: each record he would start he would have the latest Linn drum and latest Oberheim. It’s good to have a new plaything and it was certainly a challenge. And that, in a way, connected us to those house records that we liked, but instead of doing a reverent take of it, [we were] just doing it with the same spirit. They were just figuring out how to use 808s and MPCs at the time and we were just figuring out how to use Ableton. I think we tried the same approach but tried to push ourselves further, push ourselves harder, like, “What have we not achieved? What can we do still?”

In the blog post you discuss As If receiving “one mediocre review” from “a snivelling, piece of sh*t”. Presumably, it’s written in jest, but do reviews matter to you?

They do. They do more than you want them to... (Laughs) It’s funny, I just made another artist friend of mine – who I’m not going to name – turn off her Google alerts for herself. I was like, “What are you f***king doing?! That is not a way to live.” You have to read the reviews the week [the album] comes out... But, I mean, yeah, they matter. You’re trying to communicate something to the world, and when someone says that your opinion doesn’t matter – that it’s worthless – it hurts, you know? If someone says, “Nah, these other bands all matter, and they’re part of the popular dialogue, and you’re not.” But absolutely it hurts.

Is this what the song ‘All U Writers’ is getting at?

No, that was one more like, “Come on, all you writers – let’s go.” (Laughs) Because honestly I get on with journalists. I’m obsessed by music and I’d rather always change the topic to music, so there’s a way that I can relate to them in ways that I can’t to regular people. That one was just a joke between us and the writers, and I liked it at the beginning of the record as an intro. Because the writers introduce [the music] to the world, like, “Hey everybody, check this out.” So it was a message to them to sit down and get their pens out and listen to this record.

How about ‘Til The Money Runs Out’?

That was my attempt at romance. I always like that ideal in romance, where nothing else matters but this and us, and you could just be in a sh*tty hotel room and the only thing that matters is everything that you’re saying. You just never want to stop talking to each other; you just want it to go on forever. So that reckless abandon of, “Let’s just drive forever. We have no particular place to go and every place to go. Let’s just keep driving.” That ideal of romance really appeals to me.

You’ve said before that you try as hard as you can to make records as enjoyable as possible. Do you ever feel confined by that expectation? Like you can’t write a sad song, even if you wanted to?

I don’t really want to. (Laughs) No, there are a couple but I don’t know if they’re much use to anyone. Generally, our demos have a bit of a groove to them. There are some tear-jerkers in there but they’re always groovin’. You’ve seen ‘Spinal Tap’, yeah? I’ve got a few ‘Lick My Love Pump’s on deck. (Laughs) But I don’t know that the world needs those, I don’t know.

Yeah, pretty much. Some DJ gigs too. In America, we’re opening for ourselves as a Stereolab cover band, called Stereolad.

Do you switch things up much between tours? With different visuals, for example?

We just try to get better and add things to the set, but we never really did a lot with visuals. We hope that I’m the visuals.

Are you still giving out hugs at shows?

Has anyone ever reacted negatively?

No. I never initiate the hugging. I might actually throw my arm around someone as I sing, but I think I know my boundaries out there, because you have to be careful. The only thing I remember is that when I was first going out with this girl and she said, “Well, let’s Google you,” when we were on the phone. She Googled me and the first thing she pulled up was this review of someone who was talking about how I was crowd-surfing and they were having to restrain themselves from punching me in the balls. I was like, “Wait, what?!”

Yeah. She was like, “What do you do out here?” and I was like, “It’s hard to explain...” But I hadn’t known that I was inspiring that kind of reaction. I thought I was coming out there as good times. It’s only confrontational in an Iggy Pop sort of way, but it’s all love, you know?